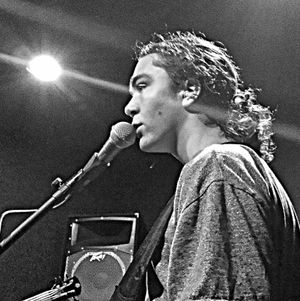 Having discovered a keen interest in rock music at an early age, Andy asked to take guitar lessons when he was 8 years old with the goal in mind of eventually playing rock guitar. Since then, he's gained considerable experience playing lead guitar in three rock bands at various live music venues in and around Austin and central Texas. Andy often cites Jimi Hendrix, Tosin Abasi, and Mike Einziger among his guitar influences. In fact, paying tribute to Hendrix when soloing on "Voodoo Chile" has often been an inspiring part of live sets for Andy and Room 24.

Andy regularly takes a turn at singing lead on songs, but especially enjoys the creativity of songwriting. Room 24 regularly performs several of Andy's songs, including "Again", "Out There," "Chaos In Melodies," "Parade," "Influenced,” “Only,” and “Righteous." Andy likes to push the envelope with his songwriting, challenging himself to be creative with music arrangements and his use of guitar effects, while staying true to an affinity to melodic lines which he says in part defines the band's sound. 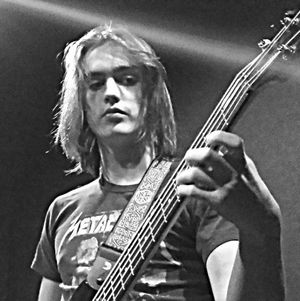 According to James, he is not the product of mere mortals; rather the collaborative creation of the Nordic gods, Thor and Odin, who carefully planned and then made into being a sublime creature capable of great strength in body, mind, and spirit.

Needless to say, Room 24’s bass player has a profound fascination with Viking history and mythology. When he is not ransacking villages and accomplishing great feats for humanity, James attends high school, plays football, and plays bass for his high school jazz ensemble. Additionally, James and his fellow band members have been playing numerous venues in Austin, Dallas, San Marcos, and Houston, Texas.

James first met Andy and Michael while the three of them attended Natural Ear School of Music. In fact, early on, he and Andy played together in a band called The Unexpected, and have been friends ever since.
They reunited musically in the summer of 2014, and along with Michael, have strengthened both their friendship and their musicianship by challenging each other to strive toward their greatest potential. 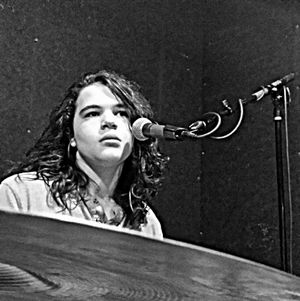 At the age of 5 years old, Michael started a persistent, nearly year-long campaign to take drum lessons until his parents finally recognized his serious commitment to music and signed him up for lessons. Since that start, Michael has enjoyed every opportunity to develop his natural talent for drumming, playing in different bands and, a couple of times, even holding his own while playing sets with such distinguished musicians as John Moyer, Jacob Gonzales, and Deborah Brown. Michael's proud of the fact that he played his first professional gig as a drummer at age 10.

In addition to frequently singing lead vocals, Michael is a prolific songwriter. During any given live performance, you'll hear Room 24 perform several of Michael's songs, such as "Bring It All Down," "Clone," "Gravity and Reality," "Shapes and Shadows," "Interweave and Disguise," and "Excalibur," with more songs always on the way.